Proceedings from this workshop will appear in the book series Oxford Studies in Theoretical Linguistics. Our collection including 16 chapters is expected to appear in the second half of 2022.

Subordinate clauses introduced by a wh-phrase are embeddable under particular clause-embedding predicates and are usually analyzed as interrogatives. The wh-phrases heading such clauses trigger sets of alternatives of the type determined by the lexical meaning of the wh-words – individuals, places, times, etc. There are, however, subordinate wh‑clauses in which the interpretation of the wh-words seems to deviate from their standard lexical meaning. These wh-clauses will be in the focus of the workshop.

Two cases in question are the use of how-like words instead of declarative complementizers and non-interrogative when-clauses. The example in (1) is from Legate (2010) showing that in (colloquial) English how can be used to embed clauses that are clearly declarative instead of interrogative. Legate argues that how in such clauses must be base-generated in its surface position. Similarly, there are in German complement clauses headed by wie ‘how’ that are not interrogative and instead express events in progress, cf. Umbach et al. (submitted). This type of non-interrogative usage of how-clauses is attested in a number of languages including, e.g., French, Greek and Hebrew, raising the question of whether manner wh-words are polysemous across languages, and if not, why manner wh-words may introduce clauses denoting facts or events.

(1) They told me how the tooth fairy doesn’t really exist.

In the example in (2), taken from Hall & Caponigro (2010), the when-clause occurs in the matrix object position and exhibits a non-interrogative interpretation which is ambiguous between denoting time intervals and events. Hall & Caponigro analyze it as a free relative clause. But unlike the analysis proposed for non-interrogative how-clauses when is moved from a lower position.

While recent studies provide a deeper understanding of interrogative embedding (cf. Uegaki 2015, Theiler et al. 2019, Mayr 2019), it remains to be investigated under what circumstances non-interrogative subordinate wh‑clauses are licensed and why some wh‑phrases can be polyfunctional, while others are restricted to their literal meaning. Furthermore, such wh-clauses raise a number of questions for the cross-linguistic wh‑hierarchy proposed by Šimík (2011) and the formation of subordinate wh‑clauses in general.

In this workshop we would like to address syntactic as well as semantic issues relating to non-interrogative subordinate wh-clauses, including (but not limited to) cross-linguistic patterns and diachronic case studies. We also welcome contributions from the perspective of non-canonical questions (see, e.g., workshop on non-canonical questions in Konstanz in Nov. 2019) pertaining to non-interrogative subordination. 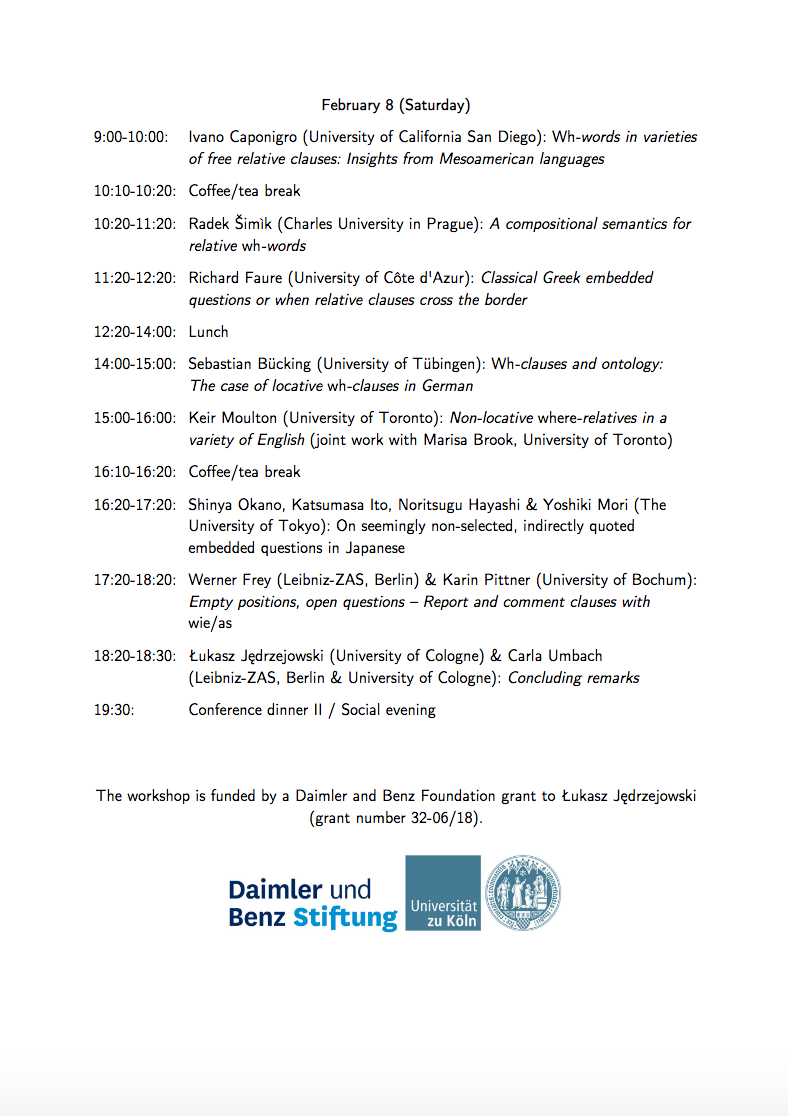 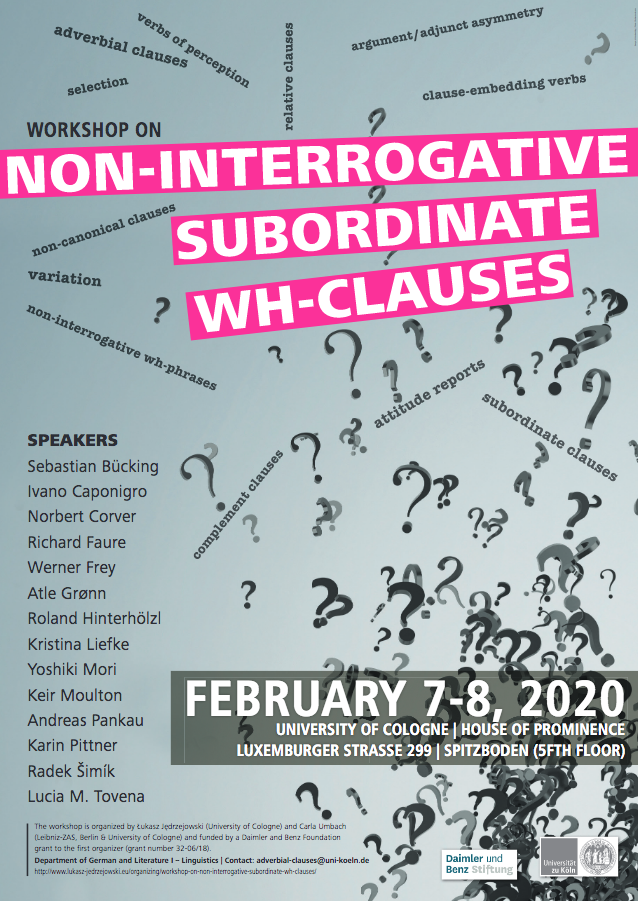 All queries are to be addressed to: adverbial-clauses@uni-koeln.de