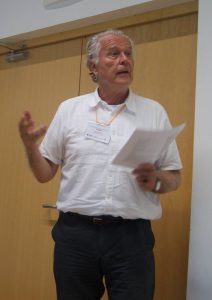 Last week I gave a lecture at the University of Vienna where I met my colleague Werner Abraham. Werner delivered a very interesting talk about modal particles in German and their sensitivity to verum focus. I commented extensively on his talk and we decided to write a joint paper on a similar topic from a contrastive point of view. On the picture to the left Werner is chairing the workshop on Covert Patterns of Modality at the University of La Rioja (Spain), that he organized together with Elisabeth Leiss. The main aim of our paper is to examine the modal particle denn in German (e.g. in Wer hat dich denn angerufen?), its distribution at the syntax-semantics interface as well as its realization in languages having no modal particles. Mainly, we show that although some languages have no modal particles, it is still possible to express the modality encoded by German denn. In this connection we talk about covert patterns of modality. Stay tuned for more information!